How to build bigger arms

How to build bigger arms

Many people in the gym are focused on getting a 6-pack or having a big chest but they forget to build up their arms. This can leave the body looking uneven and out of balance. Having big arms can make you the envy of your friends and help you have that look you’ve been striving for any season.

There are a lot or programs out there that focus on high volume training to get the job done but this can take up a lot of time and that is something that many of us don’t have these days. It’s a better idea to build a program around strength with a goal of building bigger arms added it. This will save you a lot of time in the gym.

Here is our guide to help you build bigger arms.

A compound exercise is a lift that uses multiple muscle groups simultaneously to perform a movement or to move a load.

The benefit of lifting this way for building size is that you will be able to put more load on a muscle that will cause the muscle to grow. While doing an isolation program alone may cause you to get mass at the same rate it may lead to overtraining or injury so building a program around compound lifts is a better idea than starting with isolation work.

A big mistake that a lot of people make when their trying to build bigger arms is that they focus on isolation exercises instead of the big compound lifts. Having a strong foundation on the big lifts like barbell squats, deadlifts, rows, bench press and shoulder press will give you the size you’re looking for and some strength. Building a base of strength will not only build bigger muscles it will make the muscle stronger so that it can handle a higher volume of work once you start adding in isolation work.

If you’re new to lifting try doing a strength program 2-3 times a week with 2 sets of 5 reps on the barbell squat, barbell deadlift, bench press and shoulder press. This provides a baseline of strength needed to move to a muscle building (hypertrophy) program. If you need help with learning of the basic foundational lifts, it’s a good idea to hire a personal trainer. If you can’t afford a personal trainer I highly recommend picking up the book starting strength by Mark Rippetoe.

When doing these big lifts it’s important to focus on strength rather than volume. This is important because doing too much volume with the big lifts may cause an over use injury. When doing compound lifts like the bench press, squat, deadlift or shoulder press your goal should be 3 sets of 5. If you’re more advanced you can do 5 sets of 5.

Now that we’ve gone over the importance of big lifts we can focus on what big lifts that you should focus on to build bigger arms.

For anyone trying to build size it’s important to focus on the major power lifting movements like the squat, bench press and the deadlift. These are your foundational lifts and should be the primary focus of your program.

Here are the big lifts that we’ve been talking about

Yes, I know that the barbell squat is a leg exercise but it is one of the most important exercises to build size all over the body. Loading up the body and squatting heavy weight provides overall bulk which will crossover to the entire body. On top of that you won’t have huge arms with tiny little legs. Here is a video on how to do the barbell squat.

The deadlift like the squat is an important foundational lift that helps to build size. Every muscle in the body has to put in work to perform this movement. The deadlift works on one part of the arms that is often neglected during an isolation type program and that is the forearms. The forearms have to put in a lot of work during the deadlift and often will be a limiting factor in some of the other arm building lifts. Here is a video on how to do the deadlift.

The chin up is an important exercise for building the arms because of the load it puts on the bicep muscle. It is much harder for someone to curl their body weight for reps than is to do a chin up. Having the back muscles assist with the lift will allow for more overall load on the bicep muscles. The reason why we picked the chin up over the pull up is that the supination (palms up) of the arms allows the bicep to get more work during the movement.

Here is a video on how to do a chin up

Here is a video on how to do the EZ-bar curl.

Other tips for building bigger arms

This is our basic guide to build bigger arms. If you’re more advanced you can add exercises like drop sets and extra volume to your workouts. Here are some simple tips if you feel that you need a little more for your arm building program.

A drop set is defined as: “In bodybuilding and weight training, using drop sets (aka dropsets, descending sets, strip sets, the multi-poundage system the stripping method, triple-drops, down the rack, or running the rack)[1] is a technique for continuing an exercise with a lower weight once muscle failure has been achieved at a higher weight.[2][3] It is most often performed on weight machines because reducing the weight quickly is thought by some to be extremely important, but it can also be performed with dumbbells and other free weights.”

This style of training can be used to add a ton of volume during a set. Drop sets should be used close to the end of your workout and are for intermediate and advanced lifters.

Do your isolation first

This style of lifting can add the change that you need to push past a plateau that you might run into after doing the basic lifting program. Pre-exhausting muscles for mass is a trick that body builders have been using for years. An example of this is to do your curls before you do chin ups. This style of training is advanced so make sure to save it when you feel that you’re not getting results and you’ve mastered some of the big compound lifts.

Our last tip in this guide on how to build bigger arms is to bulk up and eat more calories. Doing a bulk phase is important because without the building blocks for muscle growth you’re basically running backwards.

David S. Nickum is an inspirational fitness professional with over 10 years in the health and wellness industry. What he brings to any workout program is a deep understanding of anatomy, nutrition, and exercise physiology. His programs are unique, innovative, educational, and customized to get the job done quickly. He is a cutting edge professional who builds a program that fits your individualized goals. Starting out in the field of automotive technology industry, David had a lot of problems with pain in the lower back. This led him to the world of health and wellness. David was tired of getting prescribed pills to address his problems and he knew that physical therapy would only be a short-term fix, so he decided to learn about the human body to fix the problem on his own. Being a musician has helped David to also apply an artistic approach to health and wellness. He always told me; “exercise is an art just as much as a science”, he was right, every human is different and needs an artistic touch to get the most out of a workout. Throughout his career, David has developed a deep understanding about the human body. He started out only knowing the basics. Seven years later he has become a leader in the field of fitness, he designed his own style of training which works on posture, metabolism, pain management, and performance. After working with David my life has never been better, the pain in my body is gone for the first time in 10 years. After only 6 months of training I feel like a new person. I feel and look the best I have in years. He gave me the education and the tools I needed to prevent failure in the future. He gave me a new lease on life and I am thankful for that everyday. Circuit Training Vs Cardio: What Is The Difference? When it[...]

Running a half marathon isn’t easy and many of us[...] 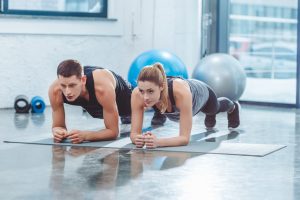 Let's get in touch

Send me an email and I'll get back to you, as soon as possible.

Subscribe to our newsletter for workout and nutrition advice.